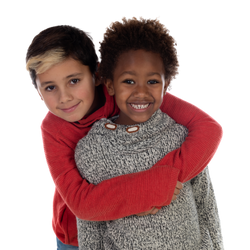 RESPECT is a best-practices, research-based, nonprofit organization. The theatrical content we continually develop stems directly from the surveys collected from our audiences; we aim to be relevant at all times.

Additionally, this survey data proves that theatrical education has a place in the classroom and can, over time, make a meaningful impact on behavior. We are thankful to Lisa Kelly Vance of UNO for her ongoing support and work in helping us process our student and teacher data.

Despite the limitations of being remote, RESPECT has remained busy. Our flexibility makes it possible for schools and organizations to continue incorporating RESPECT’s programs.

During the 2019/2020 school year, we were met with a couple challenges in our data collection.  First, and greatest, were the school shut downs caused by Covid-19.  Second was our transition from paper surveys to online surveys in an attempt to use less paper, and to make survey completion easier and faster for students and
teachers.

During the 2018/2019 school year, RESPECT made two visits to four Nebraska schools. Before and after each visit, students filled out the Reynolds surveys.

RESPECT conducted pre and post program evaluations of several of our programs throughout this last school year. The following is a sample of the positive results we found…

Thank you to everybody who took part in conducting, reviewing, and analyzing these encouraging results!

Over 500 4th – 8th graders in six inner-city Omaha schools were surveyed in relation to their viewing of the RESPECT program.

In the spring of 2002, 1,823 4th – 8th graders in Omaha-area parochial and public schools completed a survey sharing their perceptions of bullying. 1,338 students (73.5%) – a nearly equal number of boys and girls – reported that they had experienced bullying.

Kids know how they are being bullied:

82% described bullying as a problem at their school
Nearly 27% say it is a “big” or “very big” problem
Kids know who is being bullied:

Many kids know to seek help when they are bullied: